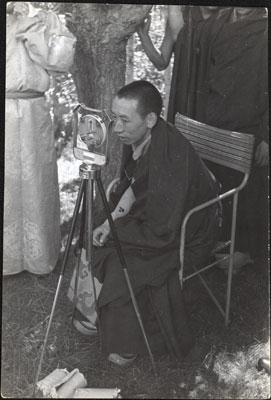 The Reting Regent sitting on a collapsible chair and talking into a public address amplifier set up on a tripod with two boy monks standing behind him and Norbhu Dhondup on the left. In the garden of his residence at Shide Drokhang following lunch given to the Mission members

Manual Catalogues - Caption in Chapman's hand-written list of negatives made whilst on the Mission to Lhasa, 1936-7 [See PRM Manuscripts Collection]: 'Ditto [Regent in front of microphone] semi close-up' [MS 15/08/2006]

Other Information - Related Images: Images prefixed with 'CR' comprise a group of negatives containing images of Nepean being carried from a boat, yaks at Mundu La, plants, Kusho Namdon La, Regent by microphone, Regent’s palace, large monk, Pargo Kaling, pagodas, Dr Morgan. The identifier ‘Mundu La’ has been written in at a later date, probably at the time of selection of images for the draft album as the name has been written in with the same blue crayon as that used to circle image numbers for the album. Spaces remain in the list where ‘Mundu’ has not been written down in the original cataloguing of the images. The photographs seems to have been taken on September 20th - 21st 1936 [MS 15/08/2006]