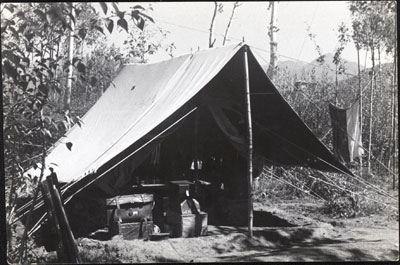 Nepean's tent with his radio equipment set up inside.

Manual Catalogues - Caption in Chapman's hand-written list of negatives made whilst on the Mission to Lhasa, 1936-7 [See PRM Manuscripts Collection]: 'Wireless tent' [MS 08/08/2006]

Biographical Information - Evan Nepean’s tent in the garden of the Dekyi Lingka (the British Mission house). As the house was not large enough to house all the members of the mission the lower ranking officers set up their tents in the garden. Evan Nepean and Sidney Dagg were responsible for the telegraph equipment brought to Lhasa by the British in 1936. As there was no electricity supply to the Dekyi Lingka they charged up their generators in the houses of Tibetan friends (such as Ringang). Along with carrying out his official duties of communication, Nepean contacted a number of amateur enthusiasts around the world with his call signal AC4YN. Before this the only telegraph machine in Lhasa was owned by the Chinese and so the presence of the British equipment undermined their monopoly on the flow of information in and out of the city. [CH 2003]