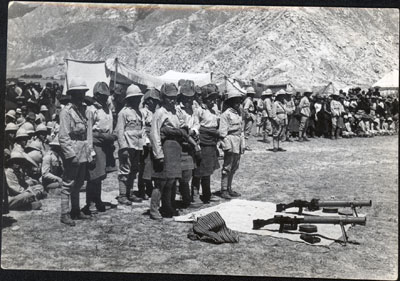 Tibetan soldiers some in old-style uniform, others in the new-style uniform at the army review in Trabshi. In front of the group in the foreground are two machine guns on the ground.

Manual Catalogues - Caption in Chapman's hand-written list of negatives made whilst on the Mission to Lhasa, 1936-7 [See PRM Manuscripts Collection]: '2 Lewis guns. Soldiers standing behind' [MS 14/08/2006]