Doctors at the Mission in Lhasa 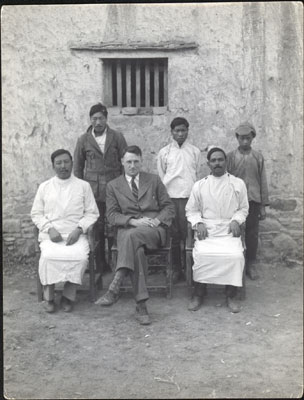 Captain Morgan, Indian Medical Service, and his hospital staff, two of whom are wearing white gowns.

Other Information - Related Images: Images prefixed with 'C.13' comprise a group of negatives containing images of a photograph of the 13th Dalai Lama, Pendong, the mission hospital group, the Regent’s departure, 5 Kamba beggars, the Ngagchen Rimpoche, Taring Rimpoche. They seem to have been taken on or around November 23rd 1936, when the Regent returned from a tour to Samye [MS 14/08/2006]