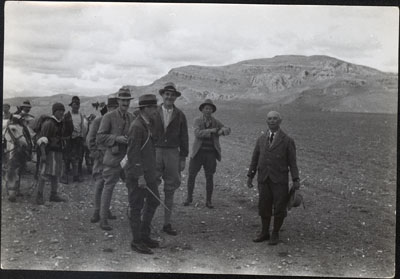 Sidney Dagg, Evan Nepean, Philip Neame, Basil Gould and David Macdonald talk on the plain near Dochen, which was a scene of a major battle during the Younghusband Expedition of 1904

Manual Catalogues - Caption in Chapman's hand-written list of negatives made whilst on the Mission to Lhasa, 1936-7 [See PRM Manuscripts Collection]: 'Macdonald, BJG, PN and group' [MS 14/08/2006]

Other Information - Related Images: Images prefixed with 'CH.' taken on the British Mission to Lhasa in 1936-37 comprise a group of negatives containing images of Dochen, Macdonald, Gould, Nepean, Neame, Kala, prayer flags and ploughing. They were all taken on August 7th - 8th 1936 [MS 14/08/2006]

Other Information - Dates: Macdonald had travelled with Hugh Richardson, Captain Battye and Dr Morgan to Gyantse where they awaited the arrival of Sir Basil Gould and the rest of the Mission party, with whom Richardson and Morgan would travel to Lhasa. David Macdonald departed from Gyantse on August 2nd, at which point Gould was en route from Yatung. This meeting, therefore, if the identification of the location as the Phari plain is correct, would have taken place on August 5th 1936 [MS 23/03/2006]