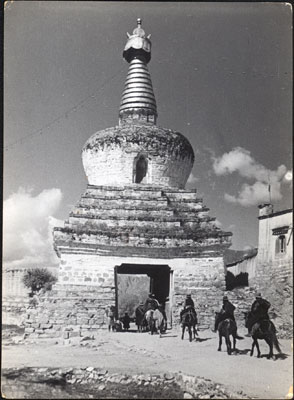 The western gateway to Lhasa, or Pargo Kaling, with riders passing through.

Other Information - Related Images: Images prefixed with 'CW' taken on the British Mission to Lhasa in 1936-37 comprise a group of negatives containing images of the Regent’s camp, young monk with kite, flailing corn, yaks coming down street, Pargo Kaling, yaks with loads, Gundeling. This list has been identified with the letter ‘W’ rather than CW, unlike most other lists in the archive, but relates to images prefixed with ‘CW’ in the draft album. The list has been written in black ink, unlike the others which are written almost entirely in pencil. They were taken on October 6th and possibly up to October 10th 1936 [MS 14/08/2006]