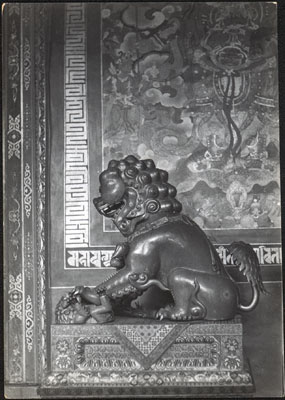 Frederick Spencer Chapman? Other member of the Mission/

Statue of lioness playing with her cub, on the right of the stable palace at the Norbu Lingka.

Contemporary Publication - This image, not cropped in the way indicated in the notes inscribed on the back of the print, was published in Lhasa the Holy City , F. Spencer Chapman, London: Chatto & Windus, 1938, p.186 facing [MS 20/03/2006]

Other Information - Photographer: Because this image has 'X' in its reference number, it is possible that it was not taken by Chapman, but maybe by Nepean or another member of the Mission using one of Chapman's cameras, although this requires further investigation [MS 20/03/2006]