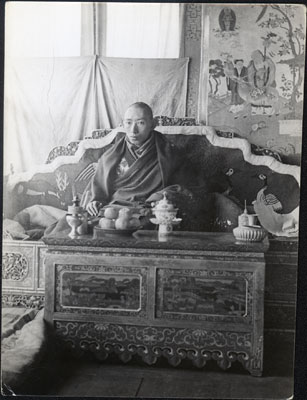 Other Information - Related Images: Images prefixed with '6' comprise a group of negatives containing images of the Regent, the Prime Minister, Pargo Kaling and route of Barkhor. They all seem to have been taken at the end of January or early February 1937 [MS 01/04/2006]

Other Information - Setting: Mission Diary entry for January 27th 1937: "Dagg set up our apparatus and we gave the Regent a second film show in a large room of the monastery attached to his summer palace. He was most interested in the colour films we have taken around Lhasa, especially the one of his departure on the occasion of his visit to Samye Monastery in October. // The Regent is a young monk of very advanced ideas. He takes a live interest in events outside his country and professes a great desire to visit India. He has lately become a very keen photographer and has also asked us to give him a wireless set as a New year's present" ['Lhasa Mission, 1936: Diary of Events', Part XIII p. 2, written by Chapman] [MS 30/03/2006]