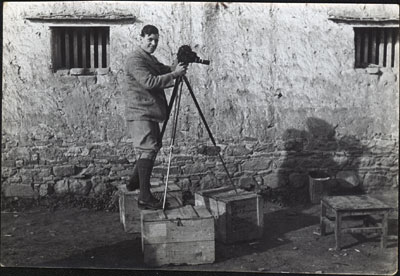 Biographical Information - Spencer Chapman standing on wooden crates with one of his cine cameras. Spencer Chapman spent a good deal of time setting up his shots and assessing how to achieve the best camera angle for the events and portraits he recorded. For example during the Palden Lhamo ritual procession he set his cameras up on the roof of an aristocrat’s house (the Surkhang mansion) which was located on the procession route. He climbed the peaks around Lhasa in order to capture the city from above and lamented that the Jo khang (the most sacred temple in Tibet) was too obscured by other buildings to get a good view of it. [CH 2003]