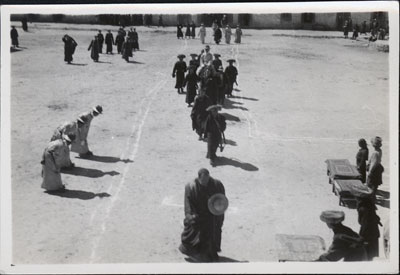 The Prime Minister of Tibet is here seen on horseback arriving at a review of Tibetan troops that was put on for Brigadier Neame of the British Mission under Sir Basil Gould. Officials can be seen paying their respects to him on the left of the image, while a large monk leads the contingent to the place where they would be seated

Other Information - Related Images: Caption for this image in Nepean's album (see Same Image As) - 'The Prime Minister arriving at the Barracks' [MS 01/08/2006]