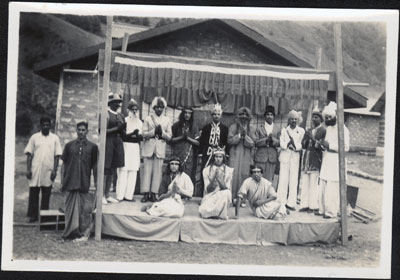 Other Information - Related Images: The negative for this image is in the Frederick Spencer Chapman collection at the Pitt Rivers Museum. 'YN.15' has been scratched into the negative [MS 24/07/2006]

Other Information - Description: 3rd August 1936: "After dinner in the evening we all went to see a dramatic performance by the 2/7th Rajputs in their lines. They had a well arranged stage, with excellent scenery, drop scenes, curtains etc., and marvellous costumes worn by King, Ministers, princess maids. The dialogue was in Urdu too high flown and rapidly spoken for some of us. After several dramatic scenes, a comic knock about turn was put on which caused much laughter. At the back of the hall was collected a considerable audience from Yatung bazaar. One doubts if they understood much of it. // There was so much action and colour about this performance that we arranged to have the performers out in the open next morning and take a colour cine film of it" ['Lhasa Mission, 1936: Diary of Events', part II, p.1 , written by Brig. Philip Neame] [MS 24/07/2006]