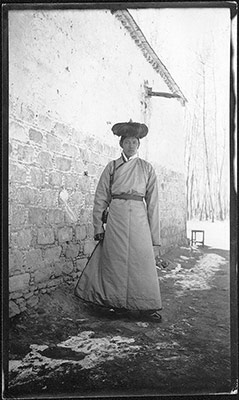 Jigme Taring, a member of the Tibetan aristocracy, dressed in ceremonial winter fur hat and silk coat or chuba standing beside a wall. He has a camera case slung over his right shoulder.

Biographical Information - [Note that detailed information will be found on the related file named Biographies, see button at top of database] He was scion of the princely Taring family. He was educated at St. Paul's school, Darjeeling and was fluent in English. He became second-in-command of the new army regiment and when it was disbanded in 1934, he became a treasurer of the government of Tibet. He married Rinchen Dolma (Mary). [KC 3/11/2005]