Procession of monks with ceremonial umbrellas 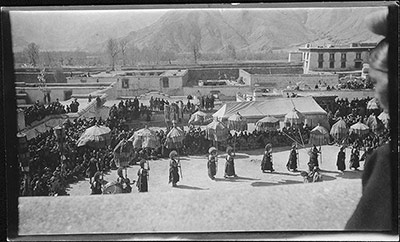 A procession of monks in yellow hats carrying ceremonial umbrellas. There is a longish tent on the right of the image under which a group of lay officials are seated. The flat roofs of houses can be seen beyond the tent. This may be the Procession of the Assembly of Worship which took place on the 30th day of the second Tibetan month. There is a lesser official in the foreground of the photograph on the right. Also there is a hand drum to the left below the parapet and a monk holding cymbals on the right.

Other Information - Setting: Hugh Richardson wrote of the setting of this image in Ceremonies of the Lhasa Year [London: Serindia, 1993, p. 76]: "...the procession sets off round the Barkor ... Then comes a line of monks in yellow hats each carrying a similar umbrella [yellow, red and blue fringed umbrella]." Also see photo p.80 [ibid.]. [KC 1/11/2005]

Other Information - Dates: This and 1999.23.2.48 may both have been taken on the same day and relate to a group of images with the number 611 stamped on the reverse in red ink. The latter were taken on the 23rd and 24th days of the first Tibetan month in the year 1940. On the other hand, Hugh Richardson thinks it may have been taken in the second month. In this case it is most likely to be of the The Golden Procession of the Assembly of Worship which took place on the 30th day of the second Tibetan month. [KC 1/11/2005]