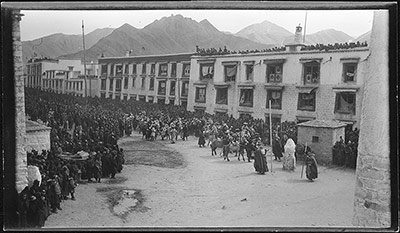 Mounted Tibetan nobility processing along the Barkhor in Lhasa. Monks and lay people line the street and there are some onlookers on the roof of a house. Two monk policemen, dobdob, can be seen on the right in front of an incense burner, bsang khang, holding wooden staves. This could be the 24th day of the first Tibetan month, Casting out the Votive Offering for the Great Prayer.

Other Information - Setting: According to T. the house on the right of the picture is Samdrub Potrang (also known as Yabshi sampho, now the Mandala hotel).