Masked and black hat dancers at the Potala 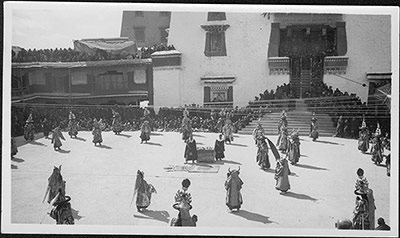 The eastern courtyard, Deyang shar, of the Potala palace. Two rings of masked dancers are performing a ritual dance. The dancers of the outer circle are wearing black hats, shva nag, and those of the inner circle are wearing animal masks. Two monks are standing in the centre with a small table between them on which ritual implements have been placed. A tiger-skin carpet is on the ground in front of them. This ceremony was part of the New Year celebrations possibly taking place on the 29th day of the 12th month, the votive offering of the twenty ninth day, Tse gutor.

Other Information - Setting: Hugh Richardson ( Ceremonies of the Lhasa Year, 1993, London: Serindia Publications, p. 116) describes the setting for this photograph thus:"...the great eastern courtyard of the Potala, the Deyang Shar. It is entered by a long, steep, triple stair below which is a well-proportioned flight of stone steps. The wide central windows of the facade above are hung with bright valances; the uppermost, curtained with yellow silk, is that of the private room of the Dalai Lama from which he may watch the dances; the two below are for the Kashag and other senior officials respectively. On the north side of the courtyard a long canopy... shelters the padded seats for the monk orchestra. An open parapet above it provides a viewpoint for spectators as does a similar parapet to the south beneath which there are galleries for ladies and other distinguished persons. Towering over the east end is a massive three-storied building reached by a long stone stairway from the Sho. At one side is a balcony for lesser officials and the central windows are reserved for foreign visitors." [KC 29/11/2005]

Other Information - Setting: Hugh Richardson writes, "Soon, to a further summons by the horns, a party of monks from the Namgye Tratsang in cremoial robes, preceded by music and carrying golden censers and ritual vessels, lead on fifteen more Black Hat dacers, who form a gyrating circle around their leader. After a while all the masked dancers who had taken part in the opening ceremonial come out, led by Shinje and dance in an outer circle around the Black Hats." ( Ceremonies of the Lhasa Year, 1993, London: Serindia Publications, pp. 122-3) [KC 29/11/2005]