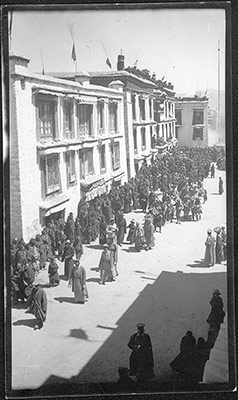 Lay officials processing on foot along the Barkhor to the Jokhang or 'Cathedral' in Lhasa. This procession takes place on the twenty-fourth day of the first Tibetan month during the ceremony of the Casting Out the Votive Offering, Monlam Torgya, at the end of the Great Prayer festival, Monlam Chenmo. Crowds of monks line the street and there are spectators in the windows and on the roofs of some of the houses. In the centre in the background there is an extremely tall prayer flag pole.