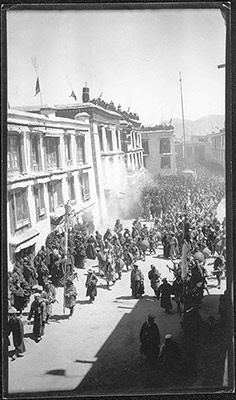 Zimchongpa warrriors dressed in ancient armour in procession along the Barkhor nearing the Jokhang in central Lhasa. This procession takes place on the twenty-fourth day of the first Tibetan month during the ceremony of the Casting Out the Votive Offering, Monlam Torgya, at the end of the Great Prayer festival, Monlam Chenmo. Crowds of monks line the street and there are spectators in the windows and on the roofs of some of the houses. In the centre in the background there is an extremely tall prayer flag pole. In the centre of the image there is a cloud of smoke. This may be from a musket volley.

Other Information - Setting: Hugh Richardson [ Ceremonies of the Lhasa Year , London: Serindia, 1993, pp. 40-41] writes: "Then an outburst of explosions and war cries announces the arrival of the Zimchongpa at the south-west corner of the Tsuklakhang ... Then the Zimchongpa march noisily up to the forecourt of the Jokhang. Some line the Barkor while others form up in two files in the centre of the road. They take it in turn to display their martial prowess, singing war songs about Penden Lhamo as they do so. The bowmen brandish their bows and the swordsmen make a great show of fencing. Then those with firearms taunt the opposing rank, challenging them with abusive language much enjoyed by the onlookers ... They hold their firearms waist-high pointing towards the opposing rank and after many theatrical gestures they loose them off simultaneously with much noise and smoke." . [KC 28/10/2005]