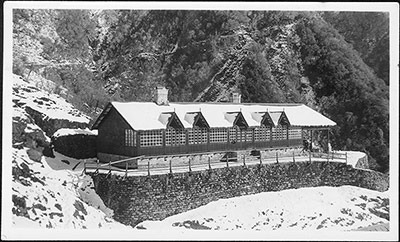 The dak bungalow rest house at Champithang between Natu La and Yatung. There is snow on the roof and icicles hanging from the eaves

Manual Catalogues - According to Richardson this is, "Champithang [Champitang] in Sikkim. The last rest house; north side of the pass before Yatung." [Hugh Richardson in conversation with Roger Croston, detailed in H. Staunton undated Related Documents File, PRM Manuscript Collections] [KC 3/11/2005]

Other Information - Setting: "These rest-houses have been put up every ten or fifteen miles along the way from Gangtok to Gyantse. They were originally built soon after the Younghusband expedition of 1904,but most of them have been enlarged or rebuilt since. They are intended for the use of Government officials but are also at the disposal of tourists, a limited number of whom are each year allowed up the trade route as far as Gyantse" [F. Spencer Chapman, Lhasa The Holy City , London: Readers' Union, p.17]. "[We] reached the bungalow of Champithang (13,350') ... This bungalow has three rooms - a small dining-room and two bedrooms ..." (ibid. 23). [KC 24/10/2005]