Coracles on the Lukhang lake, Lhasa 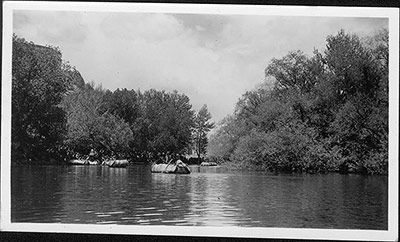 Leather coracles laden with people being rowed across the Lukhang lake where a small temple of the naga deities is found in the centre of the lake to the north of the Potala. The lake is surrounded by trees and there is a crowd of people waiting to embark on the far shore.

Notes on print/mount -"Velox" and the number 500 are stamped on the reverse of the print in black ink.

Research publication - Simon Normanton, Tibet, the Lost Civilisation, 1988, London: Hamish Hamilton, p.156, "Later that day there is a beautiful and informal festival at the Dragon Temple, on an island in a lake behind the Potala. There is a holiday atmosphere. Wine and food shops spring up, picnic parties are everywhere. The ministers preside over a small ceremony in the Temple. Afterwards they are rowed around the island in hide boats and they sink five treasures into the lake as a dedication to the gods."

Research publication - Hugh Richardson, Ceremonies of the Lhasa Year, 1993, London: Serindia, p.87-8. This ceremony took place on the 15th day of the 4th month: The Flower Offering at Gunthang ( Gung thang me tog mchod pa ). "When the Shappes have left, other officials are also rowed round the temple and after them large numbers of the general public who have been enjoying picnics by the lake, dressed in their best clothes, take to the boats and go round the temple with much singing and laughter." (p.89)

Other Information - Setting: F Spencer Chapman writes ( Lhasa: The Holy City , 1940, London: Readers Union Ltd, p.64) "The coracles are rectangular and made of yak-hide stretched over a framework of willow branches. Each boat is about 8 feet by 6 feet, and weighs 80 - 90 lb. During the crossing they get swept down nearly half a mile, so the boatmen lift the coracles onto their heads and walk up-stream again, afterwards propping the boats up on one oar to dry. They float very high out of the water and are absolutely unstreamlined." [KC 3/1/2006]