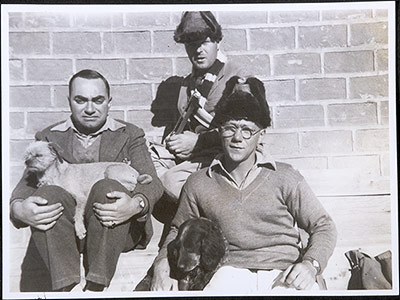 From left to right Dr G Humphreys, Harry Staunton and Eric Croyle at the Gyantse Trade Adency. Humphreys has a dog on his lap, Staunton is holding what looks like a pop gun and Croyle also has a dog beside him. Staunton is wearing his St Bartholemews scarf and a fur hat with the flaps tied up. Croyle has spectacles, knitted v-neck jumper and fur hat.

Notes on the album mount - "G. Humphreys" is written in capital letters and "Eric Croyle" in small letters in pencil on the album page below the photograph. [KC 9/12/2005]

Other Information - People: Alex McKay mentions Humphreys in Tibet and the British Raj, 1997, Curzon Press, p. 126, "Within British India, Anglo-Indians, those of mixed parentage were often subject to greater prejudice than Indians and were excluded from several areas of governmnet employment. In Tibet, however, Anglo-Indians were preferred to Indians. ... In the 1940s, an Anglo-Indian Christian, Dr Humphreys and an Indian Christian, Captain M V Kurian, paved the way for a subsequent posting of Hindu Medical Officers to Gyantse." [KC 11/1/2006]