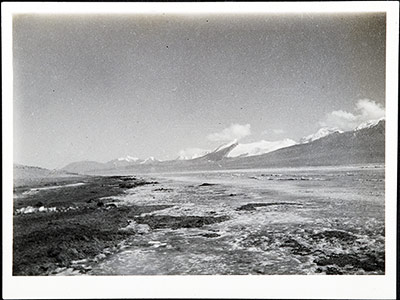 Dochen Lake with snowy mountain peaks in the background.

Notes on the album mount - "Dochen Lake" is written in capital letters in pencil on the album page below the photograph. [KC 7/12/2005]

Other Information - Setting: F Spencer Chapman writes in Lhasa: The Holy City , 1940, London: Readers Union Ltd, p.39, "The pyramid of Chomolhari is clear but does not stand out, for from here it is no longer isolated but forms the western peak of a magnificent line of mountains. Dochen Lake, the Hram Tso or Otter Lake, can be seen running up to the foot of them". [KC 7/12/2005]

Other Information - Setting: Margaret Willimason writes in Memoirs of a Political Officer's Wife , 1987, London: Wisdom Publications, p.167, "Our path ran for a time beside the Dochen Lake, a sheet of clear blue water on the far side of which rose a range of snow-clad mountains, among them Chomolhari, regarded as sacred by the Tibetans." [KC 7/12/2005]