Members of the British Mission outside with ponies 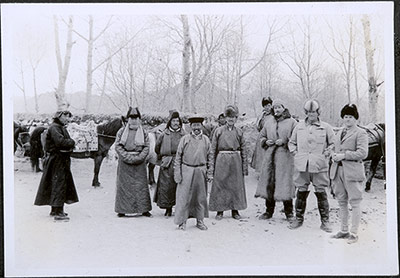 Other Information - People: Pemba Tsering: Pemba Tsering (1905 - 54), along with Norbu Dhondhup and Sonam Tobden Kazi, was a locally-born cadre officer. He was educated at the Government High School in Darjeeling based on the British model. Only after many years service in lower ranking positions on the frontier was he promoted to Political Department posts after thoroughly absorbing the mentality of a Raj officer. In 1941 he took up post as British Agent Gartok, a post which he kept until 1945. Between August 1943 - March 1944, he relieved Sonam Tobden Kazi as British Trade Agent Yatung. In 1945 he took up the post of Head of British Mission Lhasa for one year and a gain between September and December 1947 when he relieved Hugh Richardson. On 17 July, 1954 the Gyantse Trade Agency was destroyed by floods. Pemba Tsering and his wife were among the several hundred people who were drowned. His son went on to study medicine at medical school in England. ( ibid. 81-2, 219, 222, 230-1)