Officials of the British Mission on horseback 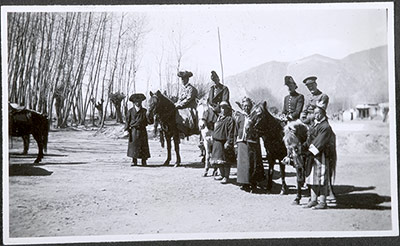 Four mounted officials attended by orderlies. From left to right (on horse back) are Sonam Tobden Kazi, Basil Gould, Capt. Thornburgh and Harry Staunton. Each of the horses heads are being held by grooms who are dressed in a wide range of clothing. From left to right, Tibetan robe and circular fur hat, fur-trimmed Tibetan robe and brocade and fur hat, Sikkimese orderly's robe and pill-box hat and Lepcha costume with striped tunic. It looks as if the party are about to depart on an official visit possibly from Dekyi Lingka.