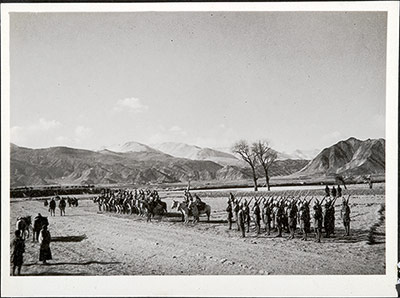 Review of the military escort at Gyantse comprising mounted and infantry contingents of the 1/15th Punjabis. The two figures in topees on the far left could be Basil Gould and either the Escort Commander, Major J.G Innes-Keys in command of the 1/15th Punjabis or the British Trade Agent, Gyantse who was, at that time, Hugh Richardson.

Notes on album mount - "Gyantse" is written in pencil and in capital letters in the centre of the page as a joint caption for the four photographs on this page of the album. [KC 11/1/2006]

Other Information - Setting: Alex McKay writes about the Gyantse Trade Agency in Tibet and the British Raj , 1997, Richmond: Curzon Press, "On 1 October 1904, with no formalities beyond raising the flag, the Gyantse Trade Agency began operations in Chang Lo ('Willow Garden'), a country house which the younghusband mission had used as its Gyantse base. In addition to local employees, O'Connor [the British Trade Agent] had a number of European staff. There was a British officer of the India Medical Service ... and a military escort consisting of 50 India soldiers, which was normally under the command of a British officer. There was also a European Head Clerk to oversee clerical staff recruited from the Darjeeling area, two Indian Army telegraph sergeants responsible for communications and a third in charge of supply and transport.'(p. 17) The structure of the administration remained very much the same until the demise of the Agency in 1948 [?]. Gyantse was selected because it was seen to be a commercially important meeting point of trade routes from India, Shigatse and Lhasa. [KC 11/1/2006]