Kapshoba, his wife and brother-in-law 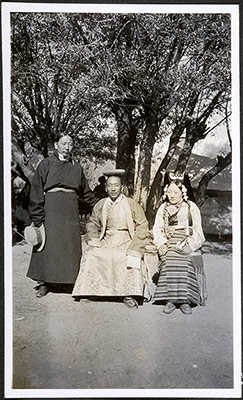 Kapshoba (seated) with his wife and brother-in-law. Kashoba is wearing a light-coloured silk robe indicating that he is a 4th rank official or above and a flat, round hat hiding his top-knot. His wife is dressed according to her rank as a Lhasa noblewoman. She has a headress decorated with corals and seed pearls, hair ornaments of turquoise and coral, an amulet box attached to her neck, necklaces of coral, pearl and possibly of turquoise and amber. She is wearing a striped apron. Kapshoba's brother-in-law, in contrast, is dressed quite modestly. As a lesser official, he is wearing a dark-coloured woollen robe. His hair is tied back and he is wearing an earring of office in his left ear.

Manual Catalogues - "Kapshoba. A rogue, a villain, a cheat; involved in bribery and conspiracy. One time member of the Kashag. He was supported in a rebellion by one college of Sera Monasterye, therefore the government bombarded the college with the help of Reginald Fox the radio operator who had been a gunner in the Great War. I was blamed for his involvement, but he had been instructed to keep out of it and to observe. Kapshoba always came out on top and he became the head of this college! He conspired with the Chinese and he was sent out of Lhasa wearing white homespun on the back of an ox in disgrace. He came back in with the Chinese. Right to left: his brother-in-law, Kapshoba, his wife" [Hugh Richardson in conversation with Roger Croston, detailed in H. Staunton undated Related Documents File, PRM Manuscript Collections]

Other Information - People: According to Who's Who in Tibet, Kap-sho-pa's "personal name was Chho-gyal Nyima Lhundup. Born about 1904. A lay official of the 4th rank. Was Hor Chikyap from which post he was relieved by Nye-mo Dongkar iin 1932, after which he worked in the Trapchi electric factory. In 1934 after the death of the Dalai Lama he was degraded and imprisoned and charged with misconduct as Hor Chikyap. Shortly after he secured his release (it is said by lavish bribery) and was appointed Tsipon (Financial Secretary)."