Dingja and Harry Staunton in the garden of Dekyi Lingka 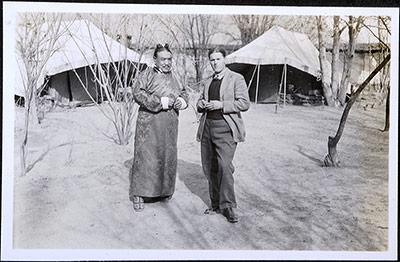 Harry Staunton and lay official Dingja standing in the garden of the Dekyi Lingka. The occasion is a reception. Two tents are pitched behind them. Dingja is wearing a silk robe and has his hair done up in a top knot. Staunton is wearing shirt and tie, pullover, jacket and trousers and is smoking a cigarette.

Notes on album mount - "Dinga and self" is written in pencil below the photograph on the album mount. [KC 7/1/2006]

Other Information - People: According to Who's Who in Tibet , Dingja's personal name was Dorji Gyaltsen and he was built in 1896. Among other appointments, he was City Magistrate in Lhasa and later Governor of Shigatse. He was considered to be very pro-British. [KC 7/1/2006]