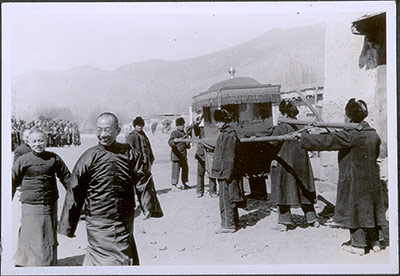 Wu Chung hsin, Chairman of the Commission of Tibetan and Mongolian Affairs of the Nanking Government (second from left). He is wearing dark coloured silk robes and has glasses. There is a sedan chair on the right being carried by Chinese retainers.

Other Information - People: Wu Chung-hsin, Chairman of the Commission of Tibetan and Mongolian Affairs of the Nanking Government, was in Lhasa in 1940. He had been sent by the Chinese government to "supervise" proceedings at the Installation of the Dalai Lama. Richardson discusses Wu's mission to Lhasa in Tibet and Its History , 1984 (2nd Ed.) Boston & London: SHambala, "In general, Wu's mission consolidated and improved the Chinese foothold at Lhasa by putting it on a regular basis; but, in spite of the grandiose designation attached to that office, he made no advance on the political front and no breach in Tibetan resisitence to Chinese claims to supremacy." (p. 157) "Wu also claimed that he personally conducted the enthronement and that, in gratitude, the Dalai Lama prostrated himself in the direction of Peking." (p. 154)