Tibetan men at a table during a New Year reception 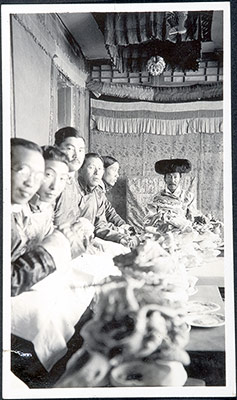 Tibetan men seated at a table with stacks of ceremonial food laid out on the table in front of them. Brocade decorates the back wall and there are paper decorations above it. There is a brocade hanging from the ceiling with a paper decoration suspended from the middle of it. Rai Bahadur Norbu Dhondup sits at the head of the table on a chair decorated with brocade. He is wearing a ceremonial silk brocade costume and round fur hat. The other men on the left are all without hats and are guests. The man on the extreme left is wearing spectacles. The food on the table looks like fried bread (kabze) eaten at the time of the New Year.

Other Information - Album: This image appears in Staunton's personal album on a page with six other images captioned as a group "British Mission Lhasa". [KC 3/12/2005]

Research publication - This image is reproduced in Seeing Lhasa, Clare Harris and Tsering Shakya, 2003, Chicago: Serindia, p.39 with the following caption: "While in Lhasa the members of the British Mission were invited to numerous parties where huge quantities offood were served by Tibetan hosts. While it is unclear which party is recorded here, the man at the far end of the table can be identified as Rai Bahadur Norbhu Dhondup who was an 'attached' member of the British political department. Sikkimese by birth, he was given the high rank of Dzasa by the 13th Dalai Lama (1876 - 1933) for his help with British-Tibetan relations. Hence he was permitted to wear the elaborate clothing seen here. He was awarded a CBE and an OBE by the British for his work at the Lhasa Mission. Gould notes that the only time he ever saw Norbhu upset was when it was pointed out that it was not the done thing to wear the two awards at the same time." [KC 3/12/2005]

Other Information - Setting: This photograph may have been taken during New Year ( Losar ) celebrations either in 1940 or 1941. This could have been a party at the Dekyi Lingka with Rai Bahadur Norbhu Dhondup sitting in a position as host. Also, the paper decorations suggest that the setting for this party is Dekyi Lingka. [KC 3/12/2005]