Eastern courtyard of the Potala during Gutor 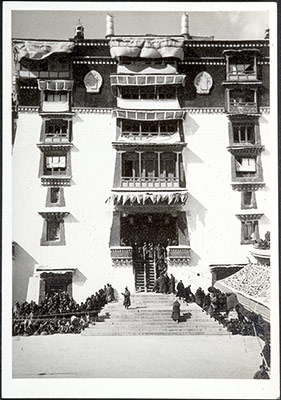 The eastern courtyard, Deyang shar, of the Potala into which monk ritual dancers enter and perform masked dances. This is probably the Votive Offering of the twenty-ninth day ceremony (Tshe gutor) which takes place on the twenty-ninth day of the twelth month immediately prior to the New Year. There is an appliquéd awning on the right.

Other Information - Setting: Hugh Richardson ( Ceremonies of the Lhasa Year, 1993, London: Serindia Publications, p. 116) describes the setting for this photograph thus:"...the great eastern courtyard of the Potala, the Deyang Shar. It is entered by a long, steep, triple stair below which is a well-proportioned flight of stone steps. The wide central windows of the facade above are hung with bright valances; the uppermost, curtained with yellow silk, is that of the private room of the Dalai Lama from which he may watch the dances; the two below are for the Kashag and other senior officials respectively. On the north side of the courtyard a long canopy... shelters the padded seats for the monk orchestra. An open parapet above it provides a viewpoint for spectators as does a similar parapet to the south beneath which there are galleries for ladies and other distinguished persons. Towering over the east end is a massive three-storied building reached by a long stone stairway from the Sho. At one side is a balcony for lesser officials and the central windows are reserved for foreign visitors." [KC 21/12/2005]

Other Information - Setting: Basil Gould writes about this ceremony in The Jewel in the Lotus, 1957, London: Chatto & Windus, p.216, "On February 7th a great crowd of the inhabitants of Lhasa and of visitors from all parts of Tibet, together with many of the British, Chinese, Nepalese, and other foreigners in Lhasa, crowded the roofs and galleries which surround the main court of the Potala, to witness the ceremony of the driving out of the evil influences of the Old Year. In turn a hundred monks with gleaming censers, cymbals and golden drums, ... , black-hat dancers, and the many other participants in the day-long ceremony, entered the courtyard down the steep steps which lead from the inner recesses of the Potala. Above, set in the hundred-foot face of the main building, were embrasures and balconies, in three perpendicular rows and four tiers, gay with silk fringes floating in the breeze and with dresses of every colour. In the centre of the highest tier, outside the smallest assembly hall where the embalmed body of the late Dalai Lama had lain pending the completion of its golden shrine, was the still empty balcony of the Dalai Lama. To its right was the Regent, invisible most of the time behind thin gold curtains. Elsewhere, according to their rank, were seated the Cabinet and monk and lay officials of different grades. Many turned their eyes to the place where, next to the Cabinet, the family of the Dalai Lama were to be seen ...".