Potala with thankas unfurled on its south wall 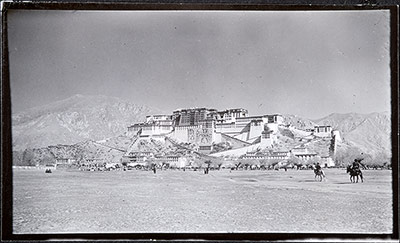 A view of the Potala Palace from the south east with tangkas unfurled on one of its walls taken on the 30th day of the second Tibetan month, the day of the Golden Procession (Tshogcho Sertreng). There is a mounted rider in the foreround on the right.

Notes on album mount - "Potala" is written in capital letters and in pencil beneath the photograph on the album page. [KC 20/12/2005]

Other Information - Setting: Hugh Richardson writes in Ceremonies of the Lhasa Year , 1993, London: Serindia Publications, p. 77, "As soon as the leaders of the procession reach the stone pillar opposite the main entrance to the Sho the boom of the long horns from the roof of the Potala gives the signal for hauling up the Koku- "The Silk Image"- a great appliqué banner which covers the lower face of the Potala for a space of some 75 by 40 feet. It consists of two panels, one rather larger than the other; in the centre of which is a huge figure surrounded by many deities and bodhisattvas." The ceremony of the Tshogcho Sertreng is described fully on pp. 74-81. [KC 20/12/2005]