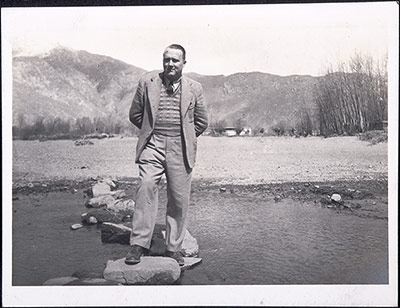 Reginald Fox standing on some stepping stones across a stream. He is wearing a tweed jacket, shirt and tie and a Fairisle jumper. There is a building in the centre distance that may be the Dekyi Lingka Mission house.

Notes on album mount - "Foxy" is written in pencil in capital letters underneath the photograph in the album. [KC 14/12/2005]

Other Information - People: Alex McKay writes about Reginald Fox in Tibet and the British Raj , 1997, Richmond: Curzon Press, p. 203 - 4, "Reginald Fox served as Lhasa mission Radio Officer from March 1947 until 1950 and ... died soon after retiring. While he and his Tibetan wife were frequently mentioned by travellers, there is also no trace of him in surviving official records." [KC 13/12/2005]