Rai Sahib Bo Tsering and Reginald Fox at a reception 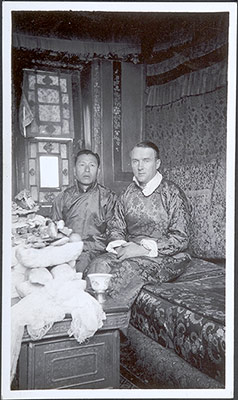 Rai Sahib Bo Tsering and Reginald Fox at a New Year reception. Both men are dressed in silk robes (chuba) and sitting on a brocade covered cushioned bench. There is a table in front of them piled high with food including fried bread (kabze) made and eaten at the time of New Year. There are also white scarves (katag) and a tea cup on the table. The wall is covered in brocade and there is a window in the background with glass panes.