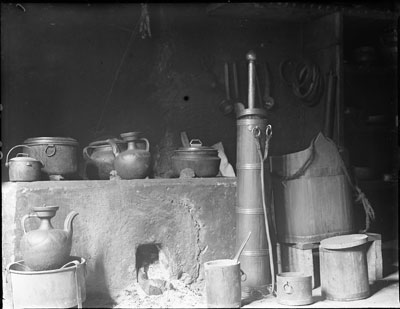 Kitchen utensils such as cooking pots, teapots, tea urn and water-bucket in house in Chumbi valley.

Technical Information - The copy image [1998.286.93.2] has had numbers added to it. These appear to have been written on the print that was being re-photographed, rather than having been scratched on the negative. This suggests that at least two copies of this image were made and that one print was marked up and then re-photographed to create the negative [MS 9/8/2004]