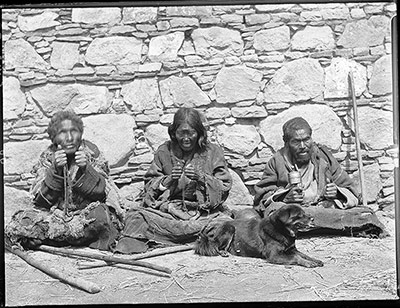 Three elderly beggars and a dog by the Turquoise Bridge, or Yuthok, in Lhasa. The woman in the centre is flanked by two men, the man on the left being blind. The thumbs are held up. In front and to the sides are their staves.

Manual Catalogues - Bell's List of Illustrations entry: "[No. of chapter] XX. [Subject of Chapter] Beggars and Robbers [Subject of Illustration]Q66 (m) Three beggars by the Turquoise Bridge in Lhasa. The one in the middle is a woman, the man on the left is blind. Note the thumbs are held up. In front and to the sides are their staves, for all are old. [Remarks] L.95"

Other Information - Cultural Background: "A beggar's form of address is peculiar. No doubt a wide diversity marks the forms of salutation current in different countries of the world, but few can be more out of the ordinary than that used by the humbler classes in Tibet towards their social superiors. Peasant, shepherd, or labourer will put out his tongue when addressing - or addressed by - one of the gentry. A beggar adds the further compliment of putting up his two thumbs, thus signifying that the person addressed is of the first quality, and may be expected to give a present in accordance with his quality." The People of Tibet , Bell, C. A., Oxford: Clarendon Press, 1928, facing p.134. [MS 10/9/2004]

Other Information - Description: "Places of pilgrimage are much frequented by beggars. Round many of the sacred edifices in Tibet run sacred roads or paths. ... These Sacred Ways are happy hunting grounds for the beggars. The stranger from another district, intent on treading the religious round, can hardly forbear the small act of charity that the demand. And of course they throng the frequented roads into the city. I never failed to find some seated by the bridge, known as 'Turquoise Roof Bridge', which spans a small arm of 'Middle River' (Kyi Chu) between Lhasa and Potala. It is on the main road between the two. Often there were three beggars in this coveted position. A woman sat in the middle telling her beads. A man sat on each side, one partially seeing and turning a prayer wheel, the other stone blind, telling his beads. As you passed by on your pony, tongues were extended, thumbs were raised. Their large black dog sat in front, quietly scanning the passers-by; their staves lay around them for they were old." The People of Tibet , Bell, C. A., Oxford: Clarendon Press, 1928, pp. 135-6 [MS 10/9/2004]