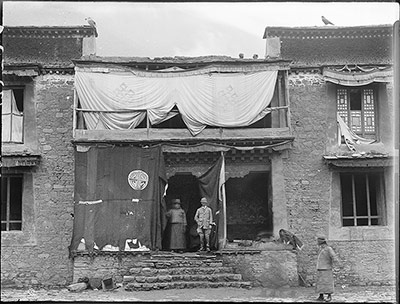 Entrance to the rooms occupied by Sir Charles Bell. Lt Col Robert Kennedy in Talung Monastery. Kennedy and the advisor Depon Shashur are standing on the steps, R. S. Norbhu is standing below on the right.

Manual Catalogues - Bell's List of Illustrations entry: "[No. of chapter] XXXII to XXXIV. [Subject of Chapter] The Religion [Subject of Illustration] Q153 (e) Entrance to our rooms in Ta-Lung Monastery, Kennedy, Sha-shur on steps, Norbhu below on right. [Remarks] L.166"