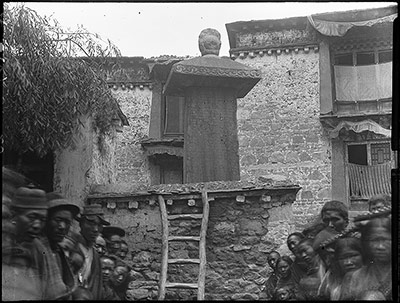 Jokhang doring or inscription pillar in Lhasa. Side view of doring showing part of building in background and stonework wall with a ladder against it. Crowds of people have gathered around the photographer

Other Information - Setting: Bell's Diary for 16th July 1921:" I examined the Tsuk La Khang Doring today, to test the differences between Waddell's translation and ours. In 13 cases the writing was quite clear on the Doring and Waddell was clearly wrong in every case. I went inside the enclosure wall for the lower lines and sat on the wall for the upper lines so that I could see clearly. The Tsendron, Tashi Babhu and R.S.Norbhu with me, and the Kasha's kan-dron, the son in law of the late Shappe Kun-sang-tse, met us at the Doring. Thus I was able to carry out my examination thoroughly. Tashi Babhu pointed out 15 places in which Waddell 's transcription differed from ours. In the two places, in which the writing was not visible, our reading is supported by external evidence. In 13 cases, as stated above the writing was clear; in these we are right and Waddell wrong in every case. Waddell has no copy of the writing on the southern side and was apparently unaware of its existence. For this contains the names of the Chinese witnesses to the Treaty, and Waddell (Journal of the Royal Asiatic Society, 1911, pages 423, 424) gives his reasons why the names of the Chinese witnesses are not written on the Doring. It would thus appear that Waddell himself never examined the Doring. I went inside the wall which encloses the Doring closely on all four sides and was thus able to examine it accurately; the upper parts I examined sitting on the wall." [Diary Vol. XI, pp. 40-41]

Other Information - Historical Background: Bell's Diary for 3rd May 1921:"Tri-mon Shape is making copies of the Lhasa, ie: Tsuk Lha-khang, Doring for me, and apparently of the Sho Doring also. He has had parts of them rubbed with oil to make the letters clearer. The translations into Tibetan of the Chinese inscriptions on the Tsuk Lha-khang Doring, made for the Simla Conference, 1913-14, were made by the Chinese interpreter to the Ka-sha." [Vol. X., p.47]

Other Information - Related Images: This image is taken from the same viewpoint as 1998.286.27, but the latter was clearly taken on a different occasion as the foliage of the tree on the left is very different. The presence of a step-ladder up to the doring may possibly be related to the checking of the inscription to which Bell refers in his Diary entry for July 16th 1921 [MS 15/9/2004]

Other Information - Dates: The date of July 16th has been suggested for this image because the foliage overhanging the doring is much more lush, as one would expect in the summer rather than early winter. Compare that of 1998.286.27, which seems to have been taken a couple of months earlier [MS 06/03/2006]