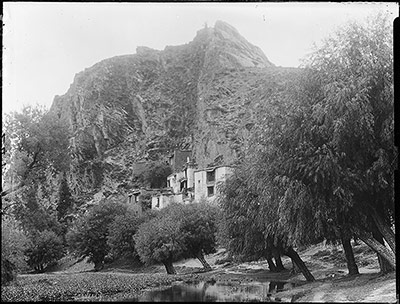 Building on the side of Chakpori built over cave containing image of Buddha.

Manual Catalogues - Bell's List of Illustrations entry: "[No. of chapter] L. [Subject of Chapter] Lhasa [Subject of Illustration] Q244(bc) House on the side of Chakpori built over cave containing image of Buddha. See Diary XII, 57. [Remarks] L251 {Y in L/(D in L}"

Other Information - Setting: Bell's Diary entry for 1st September 1921: "Near the foot of the Chakpori hill outiside Lhasa is a cave. In this is a stone image of Buddha, of rather more than life size. This is said to be an imae which constructed itself (rang-chung) and to have been in existence before Lhasa was founded. At first the outlines of the form appeared on the rock in this cave. Butter lamps were offered, prayers recited etc. and gradually the image formed itself completely. The cave is a large one" [Diary vol. XII p.57]