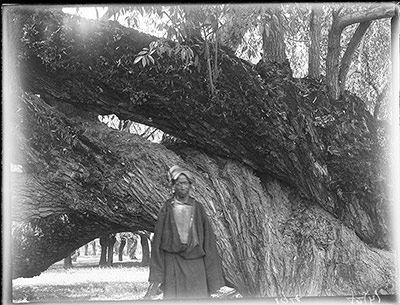 Man standing in front of two very old giant willows in the Jara Lingka, near Lhasa

Manual Catalogues - Bell's List of Illustrations entry: "[No. of chapter] XLII. [Subject of Chapter] The Flora [Subject of Illustration] Q194 (h). Two giant willows in the Jara Lingka, near Lhasa. A pair of the largest willows in Lhasa and perhaps the largest in Central Tibet. They are very old. One has a girth of 25ft near the root and of 13ft at a distance of 8ft from the root after it has been divided into trunks. [Remarks] L.214"