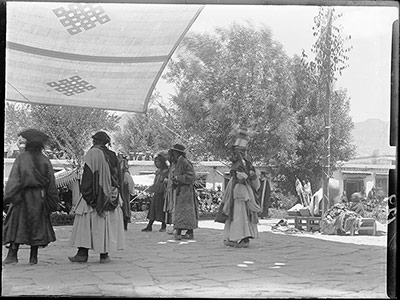 Ache Lhamo in Norbu Lingka. Close-up view of performers on stage. Dalai Lama's bodyguard can be seen in background, sitting on the roof the roof

Other Information - Dates: This photograph was probably taken on the second or subsequent day of the performance as there is a canopy over the stage, which Bell states in his diary of 5th August was not present on the first day [MS 11/8/2004]