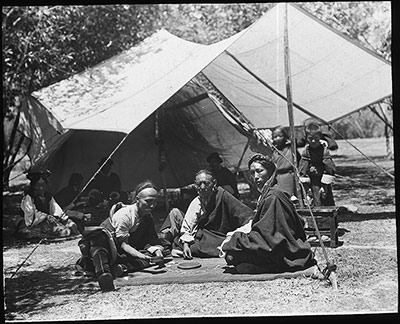 Picnic party near Lhasa. Playing a dice game sho in the foreground. A shoden (dice cushion) is in foreground with cowrie shells round it. The cowries are used for calculation.

Notes on print/mount - '41' has been written in black ink. This slide seems to have been used as slide 41 in the lecture 'A Year in Lhasa', which was first presented at the Royal Geographical Society on 3rd December 1923. The text, with a lesser number of images, was later published in The Geographical Journal of February 1924. Bell may also have presented this lecture on other occasions about which we have no information at present. [MS 24/8/2004]

On 25th May 1921 Bell discussed popular forms of Tibetan entertainment with Kusho Palhese and this prompted the following Diary entry, made on 28th May 1921 in relation to the games of Ba and Sho :" Ba played also in lingkas . This is a Chinese game of dominoes. It is played by four persons, and involves a good deal of gambling. // Sho is a game played with dice which also involves a good deal of gambling. Sho is the national Tibetan gambling game, played by all, high and low, the peasantry included. Ba is a Chinese game and requires considerable skill to play as well; its devotees are found almost solely among the upper classes. Among parties in lingkas , people playing sho will very often be found" [Diary Vol. X., pp. 86-7]

Published in 'A Year in Lhasa' in The Geographical Journal, February,1924, facing p.100:"A Picnic Party". This piece was derived from a lecture given to the Royal Geographical Society in London on 3rd December 1923 [MS 10/9/2004]

Other Information - Dates: Bell's Diary entry for 5th May 1921:"We ride through the lingka, known as 'Stony Park', where I photograph a gambling party (Photo 3A), and then through the 'Near Young Park' ( Nye-shon Ling-ka) , so called because it is near Lhasa and its trees are but young." [Vol X., pp.50-51]