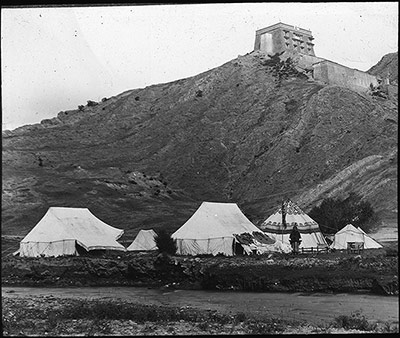 Other Information - Setting: This photograph was taken on a tour of the country made at the end of August and beginning of September 1921. Bell's diary for 24th August 1921 states: "Kennedy and I with Palhese and Norbhu leave Lhasa for a tour to the northern country visited by no Europeans as far as we know except Hue and Gabet. We have been a long time in Lhasa and it seems to be expected of us to make a short trip to the country round, for several Tibetan officials, and even the D[alai] L[ama] himself, have been recommending to me interesting places for me to visit. I think, if we go away for a little, the T[ibetan] G[overnment] may be able to deal more easily with some of their own affairs, as my presence acts as a restraint on them in various ways. We shall also please them by visiting and making present to several monasteries" [vol. XII, p.29] [MS 9/8/2004]