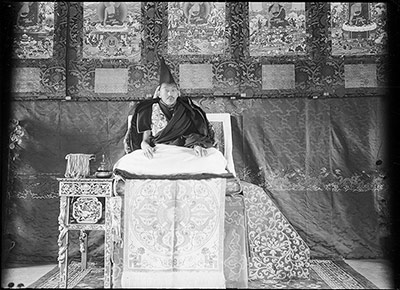 Manual Catalogues - Bell's List of Illustrations entry for H.77: "[No. of chapter] V. [Subject of Chapter] Dalai Lama. [Subject of illustration] H77 (v) Same as (u), but nearer view. Retouched"

Contemporary Publication - Published in 'The Religion of Tibet', Bell, C. A., Oxford: Clarendon Press, 1931, facing p.192:"The Dalai Lama on his throne in the Jewel Park Palace."

In Negative - All of the glass plate negatives appear to have been extensively re-touched in a variety of ways to experiment with effects. All the effects play with the best means of enhancing the central poistion of the Dalai Lama in the darkened space, especially by adding highlights to his face. However, there also appears to have been use of special films overlaying the negative [as yet unidentified], removal of areas of emulsion and possibly painting in of domestic architectural features. The edges of negative glass plate 1998.285.89 have also been overlaid with tape to crop the image, apparently to re-enforce the centrality of the Dalai Lama in the image [MS 17/5/2004]