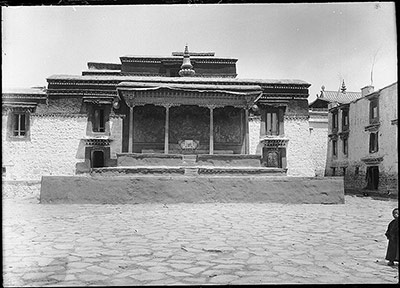 Dais outside the Jokhang temple in Lhasa from which the Dalai Lama preaches on the 15th day of the first Tibetan month.

Other Information - Setting: The square is close to the Jokhang, and in this place also many of the sporting events held during Monlam Chenmo are held. The Dalai Lama would preach only in the early morning. In his diary Bell gives reasons for this preference for early morning. 4th March, 1921: 'The Procession of the King of Love", the direct invitation [during Monlam Chenmo] to him, takes place just before or at sunrise, as a sign to him to come quickly, and appear as the sun is about to appear, in his might. This is why so many ceremonies take place in the early morning in this icy climate, when midday might be at least moderately warm. the early morning is the auspicious hour. An additional reason why the Dalai Lama preaches in the early morning (sung-cho)... is that then men's minds are considered to be at their freshest' [vol. IX, p.19-20] On 7th March 1921: 'I ask Palhese and the Tsendron independently why so many of the recent [Monlam Chenmo] ceremonies have been held early in the morning. Tibet being a cold country, and this winter time, would it not be pleasanter to have them during the middle of the day? Speaking of the Sung cho (ie: Dalai Lama's public sermon) I am told that in the early morning the mind is fresh and so it is customary to hold religious services/preach etc. at that time. During the day the mind becomes cloudy and sleepy' [vol. IX. p.29-30] [MS 28/5/2004]

Other Information - Cultural Background: Bell also comments in his diary for 7th March 1921 that the early morning light sometimes made photography difficult. This may in part have dictated the range of images from these early festivals that were attempted: 'This morning at about 7 am we saw the Dalai Lama's Chip-gyu Chem-no from the Potala to Norbu Lingka, the return journey. At the Dalai Lama's request, I had some photos taken - by Rabden - but the early morning light was too weak to produce good results' [vol.IX, p.30] [see also 1998.285.92 & 1998.285.93] [MS 28/5/2004]