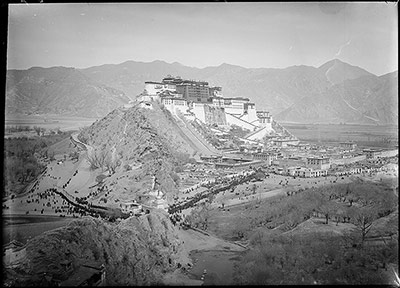 Potala Palace, Shö village and Pargo Kaling from the West, taken from Chakpori. Shows procession of monks passing through Pargo Kaling gate during the Sertreng ceremony.

Rabden or other photographer (not Bell)

Other Information - Setting: The Sertreng procession took place on 8th April in 1921. This photograph depicts the procession of monks around the Potala and the large Buddha textiles on the front of the Palace, which were key features of this religious ceremony [MS 22/9/2004]

Published in 'The Religion of Tibet', Bell, C. A., Oxford: Clarendon Press, 1931, facing p.130:"The Potala, with a procession of monks passing below it, and on its face two huge pictures, each about eighty feet high and seventy feet broad."

Other Information - Photographer: This photograph was probably not taken by bell as he describes in his Diary for this day observing the procession from the roof of a house in front of the Potala [Diary Vol. IX, pp. 86 - 96] [MS 27/02/2006]

Other Information - Description: Bell's diary entry for 8th April 1921: "We leave our house in De-kyi Ling-ka at 7.30 am, to see the ceremony known as 'The Golden Rosary' (Ser-treng). The name is taken from the procession of monks in single file carrying banners of Victory (Gyal-tshen) and other emblems as offerings to the 5th D[alai] L[ama]. ... We are taken to a flat-topped tent open, in front, and erected on the roof of a house below the Potala. On the wall of the Potala are two gigantic pictures, worked in silk embroidery (applique work); the larger of the two is to the right about 80 ft high by 90 ft broad, a picture of "King Love" (Gye-wa Champa). This is perhaps the largest picture in the world. The picture to the left is 80 feet high by 70 feet broad and is of Gotama Buddha. Both pictures are several hundred years old; the Tsendron says that they date from the time of the 5th D[alai] L[ama]. In the topmost storey of the [?] Palace (Potrang Mar-po) the yellow silk curtains indicate the room from which the D[alai] L[ama], if he comes will watch the ceremony. Below us is a large open space, 50 yards square, on the roof of a house; on the left side of it is the usual tent for the Councillors, Dukes, Dzasas and Techis and in front of this tent, just below us, the performances take place. // Soon a procession of monks in single file is seen from the direction of the Tsuk Lakang winding along slowly in single file. Each carries on a long pole a Banner of Victory. They are monks from Sera, Drepung, Ganden and other monasteries in the area of Lhasa." [Diary Vol IX, pp. 86-7]

Other Information - Historical Background: Taken during the Sertreng ceremony (or Golden Procession), in which hundreds of monks march around the Potala Palace. This is one of the key religious ceremonies of the second month of the Tibetan calendar. The idea for this event is said to derive from a vision of the Fith Dalai Lama who imagined a golden rosary surrounding the palace he had built. The massive fabric Buddha images were stored in the Potala and only revealed to the public on the occasion of Sertreng. [CH, 03/04/2000]