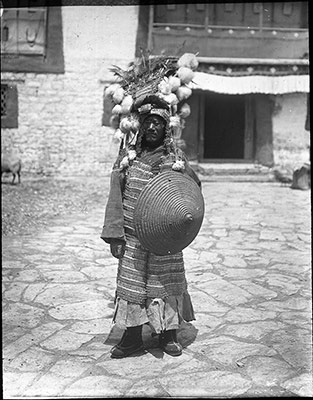 Tibetan foot soldier, or Zimchongpa, with old style armour and shield. This type of armour is worn during the dances by soldiers during the ceremony of Tse Gutor in the Potala Palace.

Other Information - Related Images: Bell's List of Illustrations does not distinguish between 1998.285.69 & 1998.285.70. The two images are very similar, although some movement of the shield is visible and slightly different incorporation of the balcony in the background and position of the subject's head and movement of the tassels on the headgear. The lantern slide was made from 1998.286.69 [MS 14/5/2004]

This lantern slide was made by projecting the negative image through an enlarger. [MS 19/8/2004]

Notes on print/mount - '38' has been written on the surround in blue-black ink. This slide seems to have been used by Bell as slide 38 in a lantern lecture titled 'The Dalai Lama' [MS 19/8/2004]

Bell's Diary entry for March 3rd, 1921: 'The Sim-chung-ngas wear high head-dresses. They contain among other adornments a row of 7 or 8 peacock's feathers and fluffy, round white balls made from the soft down of vultures, the latter a sacred symbol, for they are worn also by the 'Protectors of the Faith' (Cho-kyong). // Each man receives a small fief from the Tibetan government. This descends from father to son and the duties of a sim-ching-nga descend with it. I am told that they are all men of Central Tibet"