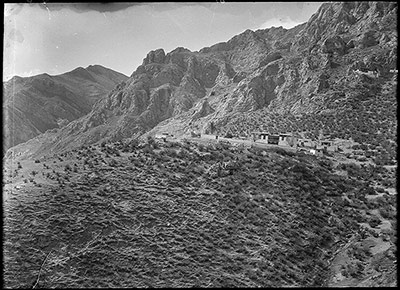 Dra Yerpa Monastery and the cave dwelling of Atisha

Manual Catalogues - Bell's List of Illustrations entry for H.61: "[No. of chapter] IV. [Subject of Chapter] History up to 1900. [Subject of illustration] H61 (o) Ditto [ref.: H.60 and P35 in index - Trayerpa Monastery] left portion. O is the rock; in a cave in this rock Atisha lived for a year. This monastery has 108 chotens; in the larger are the ashes of Atisha's main disciples; in the smaller ones are clay images made by Atisha." Although in the index entry for H.6 Bell refers to 'X' on the image marking the place where Lopon Rimpoche lived for one or two years (the 'Moon Cave'), it is not clear in this case whether 'O' refers to a marking made on the image in some other context (not visible on the contact prints for this entry, 1998.285.65 & 1998.285.66) or whether it refers to the sub-numbering system that is adopted in this list, where entry H.6 is also identified as '(o)'. [MS 14/5/2004]

Other Information - Setting: Bell's Diary entry for 10th September 1921:"In the afternoon we visit the most sacred chapels on this monastery. They are made out of caves high up in the hill-side, the rock here being apparently of limestone. There are said to be 108 (the sacred number) caves altogether, some of which are used as chapels. // We see first the small cave where Atisha dwelt. Then a large cave, containing a clay image, gilt over, of Gye-wa Champa. The lower half was made by human hands, but the upper half is believed to have made itself. It is about 28 feet high. Shesur is greatly interested in it, because the hands are in a position ( mudra ) which he has never seen in an image of Gye-wa Champa." [Diary Vol. XII, pp. 84-85]