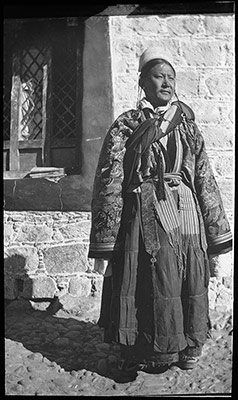 Neto Jongpen outside the kitchen of Bell's residence in the Dekyi Lingka, wearing his official feast-day dress: white cap in imitation of Indian turban, silk coat of various colours, silk scarf, skirts of black broadcloth; standing with window to left

Other Information - Related Images: The negative from which this lantern slide was made is not in the PRM Collection [MS 20/8/2004]

Other Information - Photographer: This image is very different to that which is usually attributed to Bell, and often taken by Rabden Lepcha. As the lantern slide was made using a Postcard-sized negative, it is also likely that this was not taken by Bell or Rabden. The more aesthetically sensitive composition in fact seems to be reminiscent of the work of W. P. Rosemeyer, who went to Lhasa in 1922 as part of the Telegraph line extension party, under W. H. King. He typically seems to have used P-plates. Alternatively, it could have been taken by R. S. Kennedy who was with Bell in Lhasa and seems also to have preferred Postcard-sized plates for his photographic work. It could be, however, that the image was taken by a Tibetan photographer on another occasion, the reference to Bell's kitchen being coincidental to the fact that they were resident in the official grounds of Dekyi Lingka, where 'feast-day' festivals would have taken place [MS 20/8/2004]

Contemporary Publication - Published in 'Portrait of the Dalai Lama', Bell, C. A., London: Collins, 1946, facing p.316:"Ne-to in the festal uniform of a lay official."