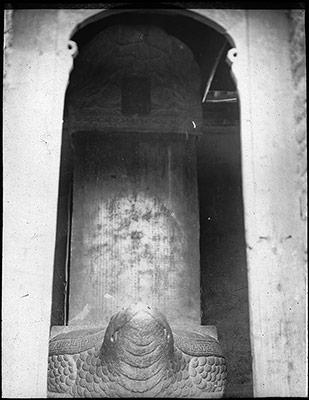 Bell's List of Illustrations entry for H.59: "[No. of chapter] IV. [Subject of Chapter] History up to 1900. [Subject of illustration] H 59 (m) Doring at Potala Sho, in one of the little houses. It commemorates the defeat of the Gurkhas by the Chinese and Tibetans in the 18th Century. [Remarks] L.28 [Lantern slide 28]"

Other Information - Related Images: The List of Illustrations does not distinguish between H.59a and H.59b. The two images appear to have been taken because of the lack of light in the small vestibule housing the pillar. The top of the pillar can be seen in neither image. However, it can be seen in the corresponding lantern slide [MS 14/5/2004]