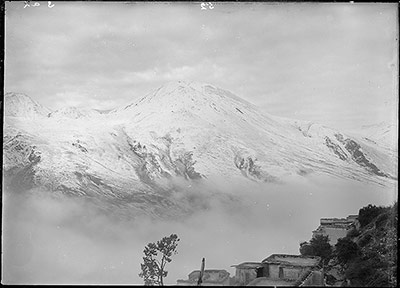 Snow covered mountains with settlement in foreground taken in September 1921

Other Information - Dates: If taken in September 1921, this image may have been taken on the tour north of Lhasa to Reting that Bell and Kennedy undertook at the end of August and early - mid September. In his diary for this journey he comments on the snowfall that was starting to settle in this part of Tibet at this time [MS 22/9/2004]