Picnickers in a Lhasa park 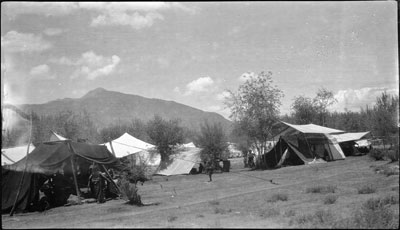 Picnicking in a park, probably near Lhasa. A number of tents some with traditional Tibetan applique designs.

Other Information - Cultural Background: Bell's Diary for 5th May 1921 reports the following information as told to Bell by Kusho Palhese:"The people of Lhasa repair to the ling-kas for picnics mainly between the 3rd and 7th months (say) from May to August inclusive. Riding today through some of the ling-kas I came across fourteen or fifteen of these picnic parties. The Chinese and the Ladakhis usually had a white tent roof, gaily ornamented with the usual blue desings, over their parties, while the Tibetans sat under trees with only a cloth some five feet high stretched along one side to keep off the wind." [Vol. X., p.51]